The Domestic Violence Death Review Committee of Ontario reviewed 267 domestic violence cases between 2003-2015 that resulted in domestic homicide (i.e. the abuser killed the person he was abusing).

The 10 most common risk factors they found were:

Any actions or behaviours by the perpetrator that indicate an intense preoccupation with the victim. For example, stalking behaviours, such as following the victim, spying on the victim, making repeated phone calls to the victim, or excessive gift giving, etc.

3. A history of domestic violence

This incident did not have to necessarily result in charges or convictions and can be verified by any record (e.g., police reports; medical records) or witness (e.g., family members; friends; neighbours; coworkers; counsellors; medical personnel, etc.). It could be as simple as a neighbour hearing the perpetrator screaming at the victim or include a co-worker noticing bruises consistent with physical abuse on the victim while at work.

5. Prior threats or attempts to commit suicide

Any recent (past 6 months) act or comment made by the perpetrator that was intended to convey the perpetrator’s idea or intent of committing suicide, even if the act or comment was not taken seriously. These comments could have been made verbally, or delivered in letter format, or left on an answering machine. These comments can range from explicit (e.g., “If you ever leave me, then I’m going to kill myself” or “I can’t live without you”) to implicit (“The world would be better off without me”). Acts can include, for example, giving away prized possessions.

The abuse/maltreatment (physical; psychological; emotional; sexual; etc.) inflicted upon the victim by the perpetrator was increasing in frequency and/or severity. For example, this can be evidenced by more regular trips for medical attention or include an increase in complaints of abuse to/by family, friends, or other acquaintances.

7. Victim had intuitive sense of fear

The victim is one that knows the perpetrator best and can accurately gauge his level of risk. If the women discloses to anyone her fear of the perpetrator harming herself or her children, for example statements such as, “I fear for my life”, “I think he will hurt me”, “I need to protect my children”, this is a definite indication of serious risk.

8. Prior threats to kill victim

Any comment made to the victim, or others, that was intended to instill fear for the safety of the victim’s life. These comments could have been delivered verbally, in the form of a letter, or left on an answering machine. Threats can range in degree of explicitness from “I’m going to kill you” to “You’re going to pay for what you did” or “If I can’t have you, then nobody can” or “I’m going to get you.”

9. Excessive alcohol and/or drug use

Within the past year, and regardless of whether or not the perpetrator received treatment, substance abuse that appeared to be characteristic of the perpetrator’s dependence on, and/or addiction to, the substance. An increase in the pattern of use and/or change of character or behaviour that is directly related to the alcohol and/or drug use can indicate excessive use by the perpetrator. For example, people described the perpetrator as constantly drunk or claim that they never saw him without a beer in his hand. This dependence on a particular substance may have impaired the perpetrator’s health or social functioning (e.g., overdose, job loss, arrest, etc). Please include comments by family, friend, and acquaintances that are indicative of annoyance or concern with a drinking or drug problem and any attempts to convince the perpetrator to terminate his substance use.

7 out of 10 of these risk factors were present in 73% of domestic violence cases they reviewed.

This is a breakdown of the frequency of each risk factor in the cases they reviewed.
(Source: Domestic Violence Death Review Committee 2016 Report) 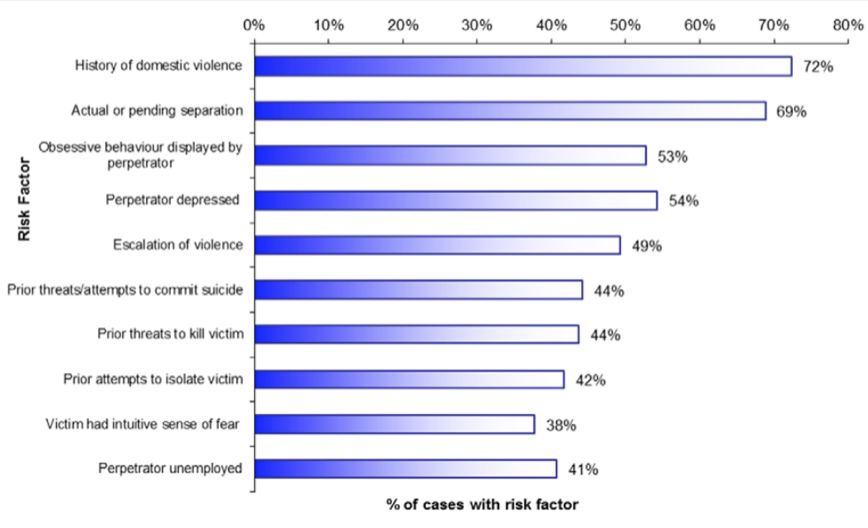 Go to the original source ▸